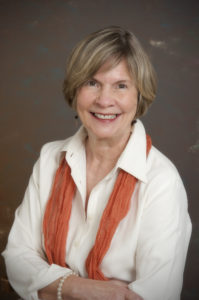 Below you can find highlights from Jeanne Murray Walker’s C.V.  If you’d like more information about publications, speaking engagements, workshops, or reprinting a poem, please contact Jeanne

A Deed to the Light, University of Illinois Press, Urbana and Chicago, 2004.

The Geography of Memory:  A Pilgrimage through Alzheimer’s, Center Street, an imprint of Hachette Press, New York, 2013.

The Alexander Street Press published Jeanne’s scripts in North American Women’s Drama, which contains the work of what the Press considers the most important women playwrights in English.  This is an online scholarly reference tool available through university and college libraries across the U.S. and Canada.  The Press features three of Jeanne’s scripts: “Stories from The National Enquirer,” “Inventing Montana,” and “Rowing into Light On Lake Adley.”  2004.

“Sparrows at Zero,” “What the Trees Say,” “Imagination,” and “Praying for Rain in Santa Fe,” illustrated by Ed Colker, (Haybarn Editions) whose art has been collected by these among many others:  Philadelphia Museum of Art, MoMA, and The Modern Art Museum-Fort Worth.

“Take Down the Sun and Use It,” The George Nixon Memorial Lecture delivered at Mary Hardin-Baylor, Belton, Texas, reprinted in Windhover, Vol. 14, January, 2010, pp. 66-74.

“The Genius of Doing What You Like,” Essay in Festschrift Volume for Clyde Kilby, The Buswell Memorial Library, Special Collections, Wheaton College, Wheaton, Illinois.

“Writing as a Subversive Activity,” The Cresset, Spring 2002. Commissioned.

“Memory and Culture Within the Individual: The Breakdown of Social Exchange in Memoirs of a Survivor,” Doris Lessing at MLA: Archives, Ed. Ellen Rose, l986 (Winner of NEMLA Award for Best Critical Volume, 1987).

“The Art of Memory and the Maleger Episode: Spenser’s Faerie Queene II, xi.” In Spenser at Kalamazoo, at Ed. David Richardson, The Spenser Society, Summer, 1978, pp. 16-32.

“Encounters:  East Meets West,” in development for a year with The PTTP’s director, Sanford Robbins and violinist Xiang Gao.

“The Tillie Project,” A Play in Two Acts. Commissioned and developed by The Centenary Stage, Hackettstown, New Jersey.

“The Chosen Daughter,” A Play in Two Acts. Commissioned and Produced by Wheaton College Theatre Department.

Developed, wrote, and hosted an hour-long documentary on poetry in the Commonwealth of Pennsylvania. This was taped live with an audience. Rebroadcast in a series called “Humanities Live,” on WHYY television, radio and webcast, repeatedly during 2007-2009.

Seattle Pacific University/Poetry Mentor: Working with 4-5 Masters of Fine Arts students in Seattle Pacific University’s Low Residency MFA Program.  Every month I respond to individual student packets which consist of poems they have written and 5 annotations on poetry collections they have read.  The entire Program (poetry, fiction, and creative non-fiction) gathers for 2 10-day residencies per year.  At each residency I meet with my students individually twice, give craft lectures, run poetry workshops, do a reading, and help to host guest writers.

Hofstra University: Fall 2014, 2015, Lecturer in Bioethics teaching narrative medicine.  I co-taught with a medical doctor and a lawyer a certificate course for doctors, chaplains, nurses, lawyers, heads of ICU’s.  My role was to increase their understanding of narrative and develop their ability to work with metaphor—which patients often employ in telling their stories.

Panelist to judge entries for the Arlen G. Meyer Literary Prize for the Lily Fellows Program in the Humanities and the Arts, December, 2005.